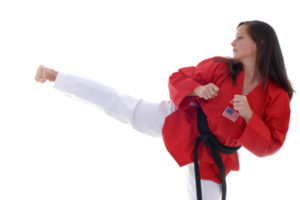 Development of Ranks
As with most activities, there are ranks to accomplish with all martial arts. Unlike other activity levels, the ranks you achieve are visible to all. Depending on the school or system, you progress from tenth to first, or eighth to first. When you start out, you will wear a white belt; intermediates wear green, and advanced users will wear black or black and red belts. Belt levels are assigned from the Korean martial arts governing bodies like the World Taekwondo Federation W.T.F or Korean Hapkido Federation K.H.F. as examples.

Hapkido means the way of harmony of spirit. Hapkido is considered a “soft” style of martial art, the Korean art of self defense. Similar to Japanese Aikido, Hapkido diverts an attacker’s flow, allowing the Hapkido stylist to use the attacker’s power against himself leading to the attacker’s defeat. Through the use of pressure on certain joints and pressure points, very little strength is needed to overcome an opponent.

Kumdo means “the way of the sword”. Similar to Kendo, the present form of Kumdo uses a jukdo (4 split bamboo sword) and the hogoo (the head and body gear). This gear allowed the Kumdo style to became more effective by allowing stronger and deadlier blows without considerable and extensive swings of the sword.

Taekwondo or Tae Kwon Do

Taekwondo is a world recognized martial art with over 51 million practitioners in over 150 countries. Recognized as a “hard” style, Taekwondo combines poomse, sparring, self defense, breaking, and martial arts philisophy. Modern Taekwondo may focus on the sporting aspect of sparring or may be traditional and incoprate all of the elements listed above. Taekwondo is an Olympic sport, and many top universities offer scholarships and grants and accredited courses in martial arts. Taekwondo means, “the way of hand and foot.”