There is hardly anybody who has not heard, at one time or another, of Karate-Do. For some it goes well with action movies, for a select few it’s a way of life.

If you ask 10 different people about karate you will get 10 different answers. It is thought of as a self-defense martial art or even as a sport. One thing is certain: its true nature and meaning is only unraveled to those who take the time and effort to learn its ways.

“Hitotsu: Makoto no Michi wo Mamoru Koto”  (First: Protect the Way of the Truth)

The history of Shotokan Karate-Do begins in the Middle Ages, on the island of Okinawa: a land situated at the borders of two distinct cultures-China and Japan. Here, in 1429, the unified kingdom of Ryukyu was born, and later knew its golden age under the rule of King Sho Shin. Although his reign is known as a period of peace, this may have been just another page in history if the said king would not have banned the use of weapons by the people. The people of Okinawa continued to practice martial arts in secret, even after the Satsuma invasion, and by 1800 a new martial art was being practiced in the villages of Naha, Shuri and Temari. Born from combining Chinese boxing with local elements, it would eventually develop into modern karate.

By this time these practices were known as Okinawa-Te, where “te” means hand, and is a reference to the fact that this martial art was developed as a way to defend oneself by the use of the bare hand. Later, Master Funakoshi, the founder of modern karate, was to say in his writings “you are to think of your hands and feet as swords.” 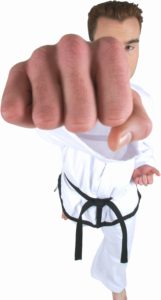 It is impossible to talk about karate and not mention Funakoshi Gichin. As the founder of modern karate, and especially Shotokan-ryu, any self-respecting dojo (karate training hall) practicing this karate style will display his portrait on the shomen (front) side of the dojo, and all, be it a beginner karate-ka (trainee) or sensei (instructor), will bow in respect to his memory. He was born in 1868 and begun studying martial arts in his childhood, at a time when the ban on weaponry and martial arts in Okinawa still stood. He studied under Itosu Anko, who was instrumental in introducing the practice of Okinawa-te in schools, which happened at the beginning of the 20th century, and, for those who practice karate, he is known as the one who developed the Pinan katas, later known as the Heian Katas, and the author of the Ten Percepts of To-de (Tode Jukun). Kata literally means “form” and it is composed from a suite of specific defence and attack movements linked together in a given way.

Lifting the ban on martial arts training and introducing them into the curriculum meant that Funakoshi could continue his training in the open and eventually be invited to give a demonstration on mainland Japan. This happened in 1922 at the First National Athletic Exhibition in Tokyo, organized by the Ministry of Education. Needless to say it was a success and it would become the marker stone in the spreading of karate all over the world.

The name Shotokan was given to the first official karate dojo, named so in Sensei Funakoshi’s honour and built from donations gathered by the karateka. The name is a word play on Funakoshi’s pen name: Shoto, meaning “pine waves” and kan, the word meaning “school”.

During his life he produced a number of writings on karate, of which the best known is probably “Karate-Do: The Master Text”. Among the others we bring forth “Ryukyu Kempo: Karate”, “Rentan Goshin Karate-jitsu” and also “Commentary on the Instructor’s Manual” or “Karate-Do for Boys and Girls”.

In 1948 the Japan Karate Association was established by Funakoshi, who served as its head until his death in 1957, when this role was taken over by Nakayama Sensei, another major name in the worldwide spread of Shotokan Karate-Do.

The Five Guidelines Of Shotokan Karate

At the heart of Shotokan karate stand the 5 guidelines of Dojo Kun, faithfully related to the ten percepts of To-de, generally translated into English in the form below:

In these five simple phrases resides the whole meaning of karate: one must have the right frame of mind, the perseverance, the patience, manners and respect in order to become a true karateka. It is so as to say that only improving physical fitness, power or technique is not enough to master the ways of karate, but one must strive to improve his mind and character through rigorous discipline.

‘The search for the old is to understand the new”. In Master Funakoshi’s own words we find the essence in which the tradition of Okinawa-Te and Karate-Do are passed through the practice of Shotokan-ryu: by finding out and leaning about the old practices and the efforts of one’s predecessors one can understand the development of the forms and techniques in modern karate and be a part of its future.