The Japanese Martial Art of Aikido

What Is Aikido – The Myths and The Truth

Aikido is one of the most misunderstood of all martial arts. There are many ridiculous myths about the art, and even in the martial arts community there is a degree of secrecy and mystery about aikido.

Although its roots can be traced back to feudal Japan, aikido is a relatively new martial art. It was developed my Morihei Ueshiba, a highly skilled and experienced martial artist. Aikido involves throws and joint locks rather than punches, strikes and kicks associated with martial arts such as Karate. The real secrets of aikido are the ability to control an attacker’s balance and energy, and to use it against them. For a highly skilled practitioner, size and strength doesn’t matter. Age and physical fitness aren’t barriers to success in aikido. 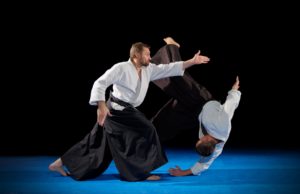 There are many different styles of aikido and the art has moved in new directions in recent years. There are hard, practical styles, and there are styles focusing on the more spiritual aspects of the art. Morihei Ueshiba was a very spiritual man, and he did not set out purely to develop a system of combat to injure or compete with opponents. At its simplest, aikido could be said to be about avoiding an attack in the first place. It is a deadly martial art when techniques are applied at full speed and intention.

Aikido is regarded as one of the most complex and technical of all the martial arts. Because of that, it can take between five and eight years to achieve a black belt. Many new students give up in the early months of beginning their aikido studies. These early stages involve learning the basic stances and body movements, and many people become frustrated with this. If the student persists, they soon appreciate that they have been learning the foundations of aikido and that all techniques rely on having mastered these.

A typical aikido class begins with warm-up exercises and stretches. Students then practice the basic body movements and move on to ‘breakfalls.’ Breakfalls are used to recover from throws without injury, and are an essential skill for all aikido students. As the class moves on, the martial arts instructor, Sensei will call a senior student on to the mat and demonstrate a technique with him. Each student than finds a partner and practices the technique demonstrated.

Aikido students are often asked if their art is effective as a form of self defense. With foundations on the battlefields of Japan, aikido has roots from a genuine combat system. Due to its technical nature, it can take several years for an aikido student to achieve a level where his techniques have a practical application. Most styles of aikido do not have competitions or tournaments, and many other martial artists take this as an indication that the art does not stand up when compared to others.

Aikido is something which must be studied and practiced co-operatively. It’s not possible to learn such a complex martial art by reading books or watching DVDs. The techniques and methods of aikido must be felt and experienced by the student to fully understand them.